You are here: Home / Schumann Robert 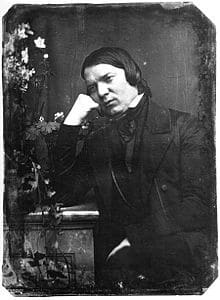 Robert Schumann was born on June 8th, 1810 in Zwickau (East Germany), and died on July 29th, 1856 in Bonn. After having hesitated between literature and music, he decided to follow the music path but his composition always remained marked by the books he read.
At first he wanted to be a virtuoso pianist but a paralysis of the right middle finger pushed him towards the composition in which he could express his various passions. His first love experience was Clara Wieck, the daughter of his piano teacher. But it took five years before her father accepted their union in 1840. All his life was a succession of ups and down to finally finish by his confinement in a psychiatric hospital.
Schumann represents the German romantic composer par excellence: poet, whimsical, depressive and passionate. Everything in his life and his work demonstrates it: the Carnival op. 9, his Symphony No. 3, called “Rhenish” or the Piano Concerto in A minor.