You are here: Home / Strauss Richard 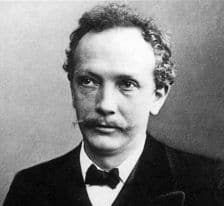 Richard Strauss was born on June 11 , 1864, in Munich in a very wealthy family, and died on September 8, 1949, in Garmisch. Showing an amazing musical intelligence early, Richard Strauss stood out by his symphonic poems, including Don Juan, Till Eulenspiegel and Also Sprach Zarathustra. The introduction of the latter, often used in film and advertising made him known to the general public. He composed five operas including Salome, Elektra and The Rosenkavalier. In 1941, at 78, he wrote his last opera, Capriccio, whose subject is ….. opera.

His music was not revolutionary but seduced by its vitality, the luxuriance of its orchestration and the movement that takes its developments. Appreciated as an orchestra leader and composer, he offers a rare example of successful artistic existence, though tarnished by his compromises with the Nazi regime. However, before the bombing that marked the end of the war, he expressed his dismay in one of his last works, perhaps his masterpiece: Metamorphoses (1945).