You are here: Home / Mendelssohn Felix 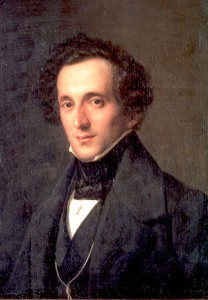 Felix Mendelssohn-Bartholdy is a German composer. He was born in Hamburg on February 3, 1809, and died in Leipzig on November 4, 1847. He came from a wealthy family. The four children (two girls, two boys) of the couple received an excellent education and the artistic aspect was very important. At nine, he had already began to compose, thanks to music professors like Carl Friedrich Zelter or, later, Luigi Cherubini. During his career, the musician traveled in Europe: in 1829, he found out England, then Italy next year. In 1831, he went back to Paris, where he had the opportunity to study. He occupied prestigious positions in Germany (music director of concerts in Leipzig) and in London (where he managed the Philharmonic orchestra).
During his lifetime, the musician met and became friend with many more artists: the German writer Goethe, the pianist and composer Frederic Chopin or Hector Berlioz.