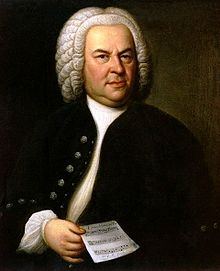 Johann Sebastian Bach was born in Eisenach, Germany, on March 21 (or 31, according to our calendar), 1685 . His family had a very important musical background and it seemed natural that he also started to study music. He became organist and composed numerous religious pieces. Bach was highly regarded throughout Germany, although for a long time he has been famous for being a virtuoso organist. He became composer of the Saxon court in 1736, and became a friend of Frederick the Great who invited him to Potsdam in 1747. Johann Sebastian Bach died in Leipzig, blind, on July 28, 1750. Among his many works, there are for example the Six Märkische concertos, the Art of Fugue or the St. Matthew Passion. Bach is now considered one of the greatest musicians of all time.