You are here: Home / Duparc Henri 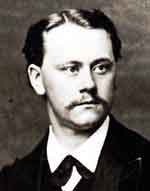 Henri (Eugène) Duparc was born on January 21, 1848 in Paris. He started his musical training with piano lessons with Cesar Frank, who recognized in him a composer rather than a pianist. It is during his law studies that he began to compose (he wrote in 1867 his Sonate pour piano et violoncelle, partly lost; in 1868, Cina Mélodies and, in 1868, Six petites pieces pour piano). We know through his correspondence that Duparc got along with Vincent d’Indy; he is also supposed to have stayed at Liszt’s for a while and to have met Richard Wagner. After the Franco-Prussian War, he was one of the first members of the Société nationale de musique, which aimed at promoting French music especially over German music. However, he went to live again in Germany. He attended a representation of Tristan in 1879, and went as well in 1883 and in 1886 to Bayreuth Festival. Among his works, he is particularly known for his 17 melodies based on poems by Baudelaire, Gautier, Goethe and Leconte de Lisle. Henri Duparc achieved the last of his melodies in 1885, while the first symptoms of his nervous disease started to appear. He ceased to compose at the age of 37, and dedicated his life to his family and to drawing and painting. He died at 85 on February 12, 1933 in Paris.