You are here: Home / Chausson Ernest 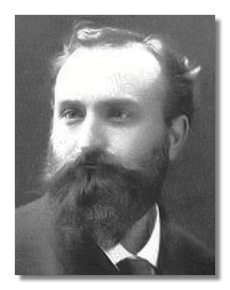 Born in Paris on January 20, 1855, Amédée Ernest Chausson, was raised in a wealthy family: his father, named Prosper (1804-1894) was an entrepreneur of public works. He received a good education and was introduced to art by his private tutor. He started by learning the piano.
After having achieved his law studies, Chausson became a lawyer on May 7, 1877. He worked at the Cour d’Appel of Paris. However, he eventually decided to devote himself to music and attended music classes at the conservatory, taught by Jules Massenet, from 1878 to 1880 (Massenet influenced the future composer, as did César Franck and Richard Wagner).
In 1883 Chausson witnessed the creation of Parsifal (R. Wagner) in Bayreuth. He was also a member of the “Sociéte Nationale de Musique”. He was appointed secretary in 1886, after a controversy in which Vincent d’Indy proposed to accept foreign works. Ernest Chausson worked on the production of his opera Le Roi Arthus (opera in which he wrote the libretto). This piece will be completed ten years later (1885-1895). Alas, he never heared it played since he died in a bicycle accident in Limay on June 10, 1899.

We can divide the work of Chausson into three periods: the first one, until 1887, was more influenced by J. Massenet, Richard Wagner or C. Franck. The second one gave birth to his masterpieces, like the Poème de l’amour et de la mer (op. 19), a beautiful melody with orchestra. Finally, in his third period, alas too short (1894-1899), encouraged by Achille Claude Debussy, Chausson devoted himself to chamber music (his famous Poem for Violin and Orchestra was written in Nancy in 1896 and remains his most played piece).