You are here: Home / Donizetti Gaetano 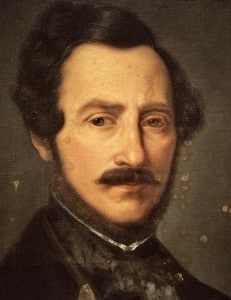 Gaetano Donizetti was born on November 29, 1797 in Bergamo, in a very poor environment. He was the fifth of a six children family. His brother Giuseppe was responsible for the music for the Pasha of Constantinople.

In 1806, Gaetano Donizetti entered the new music school in Bergamo. He is admitted as a student of singing and harpsichord. Simone Mayr, his music teacher, revealed his talent and, in 1814, made him study with the father Mattei, the master of Gioacchino Antonio Rossini until November 1817. With the master, he perfected his knowledge concerning composing symphonies and quartets. From this time on, he composed with astonishing rapidity. A symphony dated 19 November 1816 includes the following statement: “made in an hour and fifteen minutes”.

As soon as he was back in 1817 in Bergamo, he received many very popular commands: Zoraida di Granata (1822) is an example and a starting point. Then he created two others of his pieces in Naples and Milan: La Zingara and I pirati. Until 1830, he wrote 26 operas, always very fast (Elisir d’amore asked him only two weeks). His love life is good as well: in 1828 he married Virginia Vasselli, daughter of a famous lawyer from Rome. The couple then moved to Naples.
Donizetti increased his fame with Anna Bolena which was acclaimed throughout Europe (Vienna, London, Paris, …). In 1834 he was appointed professor of counterpoint to Naples Royal College of Music (he was already teaching at the Conservatory of the city). His opera Maria Stuarda (Mary Stuart), dated back to that period, was not so successful as Anna Bolena. In September 1835, the composer knew his greatest triumph with Lucia di Lammermoor, based on a novel by Walter Scott (like Anna Bolena). That same year, Bellini died. The popularity of Donizetti further increased.
But his parents, his daughter and his wife died from 1836 to 1837. He left Naples for Paris, but it bothered some local composers such as Hector Berlioz who severely criticized him. He decided to leave after the little success of The Daughter of the Regiment. In Vienna, he was successful again with Linda di Chamounix, in 1842. His latest masterpiece, Don Pasquale, created in 1843, was played at the Theater of the Italians. But his health began to deteriorate.

Donizetti was transported in a hospital near Ivry in February 1846. His nephew made him go back to his hometown, Bergamo, where he died on April 8, 1848, crowned with a glory that he could not enjoy.

He wrote 72 operas in his career. The speed at which he composed had become legendary. Don Pasquale, L’Elisir d’Amore, Lucia di Lammermoor, La Fille du Regiment are still regularly played but other works such as Il Duca d’Alba, Anna Bolena, Lucrezia Borga … deserve a better fate.