You are here: Home / Berlioz Hector 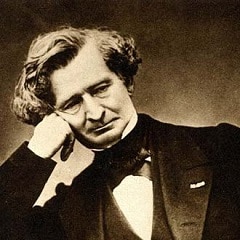 Hector Berlioz was born on December 11, 1803, in Côte-Saint-André (Isère, France) and died on March 8, 1869 in Paris. He renewed symphony deeply with the Fantastic Symphony (program music), Harold in Italy (Sinfonia concertante) and Romeo and Juliet (dramatic symphony). He invented the “dramatic legend” genre with The Damnation of Faust and The Childhood of Christ, between opera and oratorio. As a fiery and revolutionary genius, he produced operas which were not to the Parisians’ taste. His pieces were rejected. He also organized huge public concerts, with many musicians, which ruined him. As a consequence, he went on tour all around the world (Center of Europe, Russia, Germany…) where his music was appreciated.
Original and innovative, he was really controversial. In France, his work has been recognized slowly.