You are here: Home / Gounod Charles 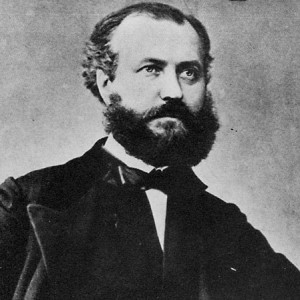 Charles Gounod was born in Paris on June 17, 1818. His father Francis was a drawing teacher. His mother, Victoire, autodidact, played the piano remarkably. Gounod’s father died when he was five and his mother had to manage the home alone. She noticed the Charles’s gifts and gave him music lessons. At eighteen, he entered the Paris Conservatory.

Gounod worked to win the first Prix de Rome, which would allow him to get a scholarship and a very pleasant stay at the Villa Medici (Rome) for two or three years. After a second price in 1837, Gounod won the first one in 1839 with his cantata Fernand. He met the sister of Felix Mendelssohn-Bartholdy, Fanny. She introduced him to the works of Johann Sebastian Bach, Ludwig van Beethoven, and his brother. In 1841, also thanks to this scholarship, he made a tour of the musical centers of Germanic language: Vienna, Berlin and Leipzig, where Mendelssohn demonstrated admiration for Gounod and encouraged him to forge a career as a composer.
In 1854, Gounod composed his first opera, Sappho and the bloody nun. It appealed to Hector Berlioz but was nevertheless a failure. In 1858 the composer’s mother died while he was getting really successful: The Doctor in spite of himself (1858), Faust (1859), Mireille (1864), Romeo and Juliet (1867). In Faust, Gounod showed a delicate and very moving sensuality and it revealed an obvious theatrical sense. In 1859 he made the acquaintance of Richard Wagner, who liked the man but thought that his music lacked depth. In 1870, he composed a patriotic cantata in response to the war against the Prussians.
He took refuge in London after the advance of enemy armies. He composed several songs that collected much success. He got the leadership of the choir of the Albert Hall for one year. At the end of the war, Gounod remained in London for some time and then returned to France in 1874. He reconciled himself with his wife. This case caused him many jokes and gossip in the “people” newspapers of the time.
He also composed for the opera but without the inspiration of yesteryear (Polyeucte in 1878). He then turned to sacred music and his oratorio Redemption in 1882 was a great success. It is now regarded and honored.
In 1891, he suffered a stroke which made him hemiplegic. In October 1893, Gounod went into a coma while completing a Requiem for the death of his little son. He died at St. Cloud a few days later, on October 17.
Many pieces were very popular in his time. His famous “Ave Maria” (on a Bach prelude) remains his best work. Maurice Ravel considers Gounod as the “father of French melody”. Unfairly, much of the music of Gounod is ignored today.