You are here: Home / Bizet Georges 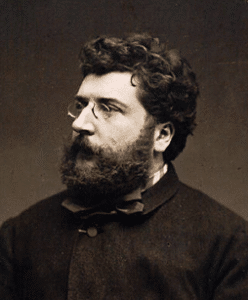 Georges Bizet was born in Paris on October 25, 1838, and died on June 3, 1875 in Bougival. Bred within a family of musicians, he attended the Conservatoire of Paris where he revealed his talent as a piano player. He also began to compose quite early: at 17, he wrote his first symphony and, two years later, he won the Prix de Rome. Unfortunately, his promising beginnings did not allow him to earn a living because he was not as successful as expected. The public is sometimes scandalized by his works. However, Bizet is considered as one of the greatest French musicians of the end of the 19th century nowadays, with Camille Saint-Saëns.